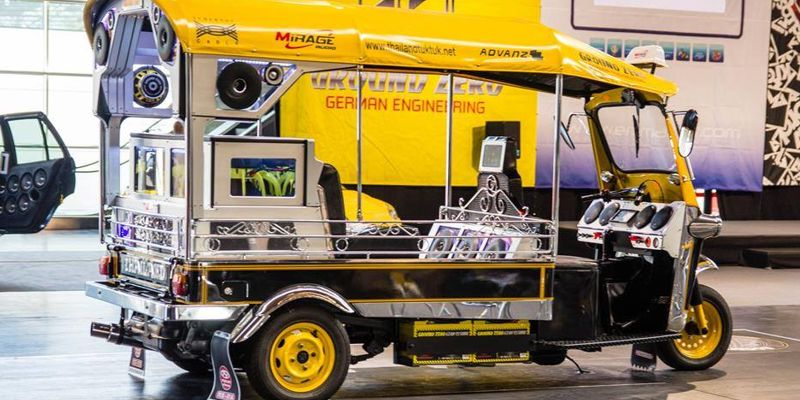 For the 2nd time, GZ is the Main Sponsor of the EMMA European Final, held in Salzburg during the “Salzburger Auto Messe”. But in reality, GZ activities are going far beyond:

Back in 2013, the GZ booth at the same event was the “attraction of the whole show”, providing fun and information to end users as well as to GZ´s business partners. For the 2014 event, the guideline has been to put even something on top:

“It is planned to implement our activities in Salzburg based on our 2013 strategy, but boosted by even more eye- and ear-catching highlights”, said Ground Zero’s CEO Karl Felix Lautner. One of those “eye- and ear-catchers” will be the European premier of the already legendary “BOOMTUK”, a three-wheeler full of car audio components, custom made in Thailand and shipped all the way to Europe for its promotion.

Next to this spectacular vehicle, another one is showed: “The Reference”! Based on the latest Honda Accord and in cooperation with one the most prestigious Car Audio Installer in Asia, Mirage Car Audio, GZ shows the ultimate sound performance in a car using only the outstanding components of the GZ Reference Line. “The selection of High-End components, the extraordinary installation and the sound tuning by Mirage are making sure, that everyone visiting the show can see why GZ´s Reference Line is awarded all over the world, including already two EISA Awards in Europe in a row” Karl Felix Lautner is adding when speaking about that 6-months long project.